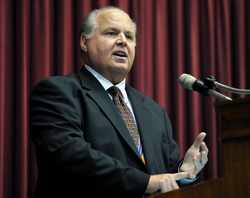 On Feb. 24, House Democrats will hold a hearing on “traditional media’s role in promoting disinformation and extremism.” This hearing is a dangerous threat to American democracy and goes entirely against what the Founders intended when they made a free press Americans’ guaranteed First Amendment right in the Constitution.

It’s also just the latest threat against free speech from the left, which has now mainstreamed a despotic desire to use government to cancel conservative speech. Just last week, New York Times columnist Nicholas Kristof called for Fox News to be on trial for supporting former President Donald Trump. This is the same Kristof who recently began calling for a War on Terror-style campaign against Trump supporters and “the ecosystem that produces them” — completely missing the key difference between the right to free speech and the lack of rights to commit political violence.

Kristof’s dangerous rhetoric joins that of other influential mainstream media figures who are targeting media they deem too friendly towards Trump. Washington Post columnist Max Boot wants cable companies to cut off Fox, and MSNBC commentator Anand Giridharadas suggests that the outlet shouldn’t even exist.

Freedom of expression is essential to a flourishing democracy, which is why I oppose unconstitutional limits on free speech. It’s why I supported the rights of liberal groups like the Brennan Center to oppose my nomination to the Federal Elections Commission 20 years ago even though they said things I felt were often unfair and sometimes untrue. Kristof has the right to publish his views if they are peaceful, just as Tucker Carlson and Rush Limbaugh have said things that Democrats don’t like. Calls to shut down a major news source like Fox, or even its smaller allies in the conservative media world, whether through corporate deplatforming or government force, cross the line from opposing ideas to undermining our civil society.

The Feb. 24 hearing will take place seven days after Rush Limbaugh died. Limbaugh was a giant in conservative media, but the industry he helped build couldn’t have existed if the so-called “Fairness Doctrine” had been in place. Indeed, it was the Reagan-era repeal of the doctrine that gave Limbaugh, and eventually thousands of talk show hosts of all political stripes, the ability to be absolutely, 100% American in their partisanship without threat of government tyranny.

Boot, Kristof and others are wrong if they think that left-wing news sources don’t mislead the public. The Steele dossier, a largely falsified document that generated fantastical claims from MSNBC that Trump was a Russian asset, certainly qualified as “fake news.”  “Mainstream” media reported as fact a story that Trump insulted fallen American soldiers, which the author walked back after it was contradicted by multiple officials. Then there is the unforgettable image of a CNN reporter standing in front of a burning building as he called anti-police riots “fiery but mostly peaceful.”

Using government to restrict “wrong” speech creates a chilling effect. People will get the message that they don’t deserve to express themselves in the public sphere. Doing so may reduce divisiveness, but only in the way that nations like Russia, China, and Iran avoid “divisive” public debates.

If patriotism and respect for diversity aren’t reasons enough for the mainstream press to pause its attack on free speech, perhaps its self-interest will be. Trump was accused of targeting journalists, but it was the Obama administration that actually wiretapped them. What if a future populist, conservative president followed Obama’s path – but went one step further, ordering the FCC to cancel outlets that allowed a commentator’s undesirable opinion to be heard? If free speech can be tossed aside on a whim, not only the left will use that power.

Those in the media and on Capitol Hill who misunderstand free speech are making a grave mistake. They should drop their dangerous demands before they cause irreparable damage to our democracy and to our society.

Is COVID Almost Over? | Power Line

Why did baseball capitulate? | Power Line