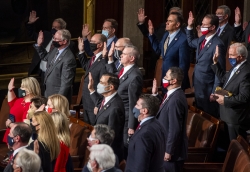 Last month, the 117th Congress arrived in Washington with plenty of fresh faces and new ideas for governing. More than five dozen new members entered the House and Senate. Only a handful of them, such as Wyoming Republican Rep. Cynthia Lummis,  have previous experience in Congress.

These new-to-Capitol Hill officeholders made plenty of promises on the campaign trail, and they are eager to show voters that they can get things done. They want to write legislation, engage in oversight at hearings, and debate matters important to their constituents back home.

Unfortunately, their dreams of getting things done will soon be frustrated. Why? Obviously, the madness of Jan. 6 and the ensuing impeachment drama were intensely disruptive. No member of the House or Senate had planned to spend time dealing with traumatized staff, responding to constituents and colleagues who wanted to know what to do, and the crush of media requests.

There also is a new president, who wants Congress to pass a massive and controversial COVID-19 relief bill — pronto. And the Democratic leaders of both chambers have their own priorities, including H.R. 1, the nearly 800-page bill that would remake American elections and more. The Senate, for its part, will also need to review and confirm more than 300 individuals who will be nominated to Cabinet positions by President Biden.

But the bigger problem is that they came to Congress under a misapprehension: that they would be allowed and empowered to govern. That is not the way Congress works these days. The newly arrived legislator is quickly confronted with a few basic demands: raise money for reelection; obey party leadership; and don’t fraternize with members of the other party.

After weeks of delay, new members are finally finding themselves being seated on committees and subcommittees, whose first order of business will be to adopt committee rules with little input from minority legislators. Thereafter each committee chairperson will move to hold a televised hearing on a topic that the speaker of the House and Senate majority leader will view as helpful to party fundraising and building a good media narrative. Right about then is when the junior legislator will begin to wonder in earnest, “When do I get to govern?”

What new legislators should know is that it does not have to be this way. This current arrangement of Congress being run in a top-down, rabidly partisan fashion — with most legislators relegated to a role akin to a court eunuch — is a historically peculiar, and relatively recent, development.

It was not too terribly long ago that power in Congress was distributed among both leadership and committees. Newly arrived legislators could learn the crafts of policymaking, oversight, and bargaining through toil on committees. They could approach committee chairs to ask for funds to help their voters back home — whether it be for paving a crumbling road, dredging a silted-up harbor, or sprucing up a local attraction to draw more tourists.

As recently as the early 1990s, the newly arrived lawmaker would have sufficient personal staff to answer the relentless requests from constituents who wanted help, and representatives of interest groups who came knocking on their office doors to talk. They also could promptly get nonpartisan, expert advice and analysis from the legion civil servants at legislative branch support agencies, such as the Congressional Research Service.

No more. Congress began cutting its capacity around 25 years ago despite the work of governing growing larger and more complex, and despite each legislator representing 750,000 constituents on average. Today, Congress has fewer staffers and fewer support staff than it did in the 1980s, and its internal organization and rules are ill-designed to meet the challenges of governing. In a fit of self-righteous pique, both parties swore off earmarks a decade ago, which snatched from most legislators the power to fix problems in their districts and states. (The big dogs in both chambers kept their power to direct spending.)

The good news is that newly arrived members need not shrug and tolerate this situation. The Constitution permits Congress to structure itself and fund itself as it sees fit. Congress has reformed itself previously and it can reform itself again.

Freshmen should demand that they be empowered to govern. They can work with the Select Committee on the Modernization of Congress, which has been making upgrades to the House of Representatives. They can approach the legislative branch appropriations subcommittees, and request more funds, better technology, and other changes to enable legislators to better serve the voters who pay their salaries. They also can get together and form Article I caucuses that will bargain with chamber leaders for upgrades.

Newly arrived legislators have an inherent interest in making Congress work better for them, and the country. With the public approval rating of Congress hovering at 25%, they can make the case that business-as-usual hasn’t been working. Seldom in the life of an elected official does self-interest and the public good so neatly coincide. New legislators should seize the opportunity to be changemakers.

Kevin R. Kosar is a resident scholar at the American Enterprise Institute and the co-editor of “Congress Overwhelmed: Congressional Capacity and Prospects for Reform.”

Why Rep. Stefanik is the Right Choice To Lead the Conference

News Business Is in a Death Spiral of Its Own Making