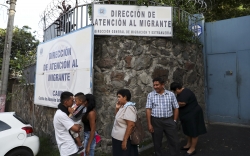 When President Biden recently signed executive orders effectively rolling back efforts by the previous administration to reduce the 2019 surge in unlawful crossings at the southern border, he proclaimed, “I’m not making new law. I’m eliminating bad policy.” The obvious intent of the declaration was to dispel any suggestion that the newly elected president was trespassing on Congress’ constitutionally exclusive legislative authority. But a perusal of one of those orders reveals that one of the president’s initiatives seems to have slipped his mind.

The order includes a provision to “conduct a comprehensive examination of current” executive branch policy “governing the adjudication of asylum claims … to evaluate whether the United States provides protection for those fleeing domestic or gang violence in a manner consistent with international standards.”

On its surface this would seem unnecessary, in that U.S. asylum law is already consistent with “international standards.” What is not so convenient, however, for the man who made that proclamation about “not making new law,” is that those international standards don’t include language that could be inferred to mean those “fleeing domestic or gang violence.”

Much of U.S. asylum law was enacted as a result of becoming a party to the 1951 Convention Relating to the Status of Refugees and its ensuing 1967 Protocol. According to federal statute, the U.S. government “may grant asylum to an alien who has applied for asylum” if the government “determines that such alien is a refugee.” The key to the current discussion at hand is the definition of the word “refugee.” A refugee is defined in federal statute with language virtually identical to that which is in the 1951 Convention — to wit, a “refugee” is “any person who is outside” the country of their national home or, if they have none, outside the country in which they “last habitually resided, and who is unable or unwilling to return to, and is unable or unwilling to avail himself or herself of the protection of that country because of persecution or a well-founded fear of persecution on account of race, religion, nationality, membership in a particular social group, or political opinion.”

In 2018, in response to a number of asylum claims by persons claiming victimization by non-state actors (e.g. spouses, gang members) as opposed to persecution as a result of government policy, then-Attorney General Jeff Sessions issued an Interim Decision drawing a distinction between the two classes and effectively disqualifying those who could not prove political persecution. This policy directive – clearly consistent with federal statute and “international standards” – was deemed unlawful by a federal district court judge.

There are now indications that the Biden administration is sending signals of its stance to the broader legal community including, potentially, the federal judiciary.

In a suit filed last week by the ACLU of Massachusetts and a Boston-based law firm, messaging integrating the text of statute and the text of President Biden’s order seems to be taking hold. In their quest to reverse a Trump administration directive applying public health law to deny entry of individuals into the U.S. due to the COVID pandemic, representatives of the two litigants appear to be taking their talking points from the president’s order.

In his explanation of the law firm’s motivation for filing the complaint against the U.S. government, a lead lawyer explained, “We are proud of the work we are doing to reunite families seeking legal refuge in the U.S. … [and who are] in our immigration system … fleeing violence and persecution in their home countries.” In fact, unlike political persecution, there is no statutory basis for awarding asylum on the basis of “fleeing violence.” But that is obviously not stopping President Biden and like-minded lawyers from arguing, in effect, that statute is no more than a foundation upon which the executive and judicial branches are to build upon.

So much for the rule of law.

Compounding this likely driver of mass migration toward the U.S. southern border is the climate of violence prevalent in the countries of the Northern Triangle – Guatemala, Honduras, and El Salvador – and the understandable desire for their nationals to flee. According to former assistant U.S. attorney and Senior Fellow in Border Security for the Texas Public Policy Foundation Josh Jones, due to the power and influence of violent gangs, much of the population of the Northern Triangle would likely qualify under the revised rules. Additionally, Jones observes that if one or more transnational criminal organizations based in Mexico were to be classified as a “gang” for purposes of asylum policy, the U.S. could see millions of Mexicans also swiftly proceed to make a gang violence-based asylum claim.

As a signatory to international agreements whose provisions are the basis for U.S. asylum law, our Union is not precluded from expanding upon those provisions. However, if for no other reason than to lend credibility to President Biden’s claim that he’s not attempting to make law, it should be Congress that accepts its constitutional role and legislates that expansion. And if Congress should do so, we the people can hold the legitimately empowered branch of the federal government accountable for the consequences at the southern border.

John Hostettler is vice president of federal affairs, states trust at the Texas Public Policy Foundation. He previously served six terms in the United States House of Representatives from 1995 to 2007 where he was chairman of the Subcommittee on Immigration, Border Security, and Claims of the Committee on the Judiciary for three terms.

Gerrymandering and the Point of No Return