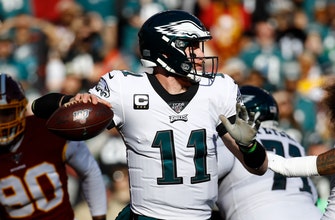 PHILADELPHIA — The Philadelphia Eagles have agreed to trade Carson Wentz to the Indianapolis Colts, according to a person familiar with the deal.

The Eagles will receive a third-round pick in this year’s draft and a conditional second-round pick in 2022 that can turn into a first-round pick if Wentz plays 75% of the snaps this year or 70% and the Colts make the playoffs.

The person spoke to The Associated Press on condition of anonymity because the deal hasn’t been announced.

Wentz is coming off the worst season of his five-year career and was benched for rookie Jalen Hurts after 12 games. He finished third in NFL MVP voting in 2017, when he led the Eagles to an 11-2 record before a knee injury ended his season and Philadelphia went on to win its only Super Bowl title.

The deal will reunite Wentz with Colts coach Frank Reich, who served as Philadelphia’s offensive coordinator his first two seasons in the league. The Colts are turning to their fourth starting quarterback in Reich’s four years. Andrew Luck retired abruptly before 2019 season and Jacoby Brissett took over. Philip Rivers led the team to the playoffs in his only season in Indianapolis in 2020. After Rivers retired, Wentz became an ideal fit for the team.

Wentz is entering the first season of a four-year, $128 million contract he signed in June 2019. The Eagles will absorb a significant salary cap hit of $33.8 million in dead money on their 2021 cap.

The Eagles traded up twice in the 2016 NFL draft to select Wentz with the No. 2 overall pick. He started all 16 games as a rookie and had a breakout sophomore season before he tore two knee ligaments in Week 14 and watched Nick Foles lead the Eagles to a Super Bowl win over New England.

A back injury ended Wentz’s season early in 2018 and Foles led the Eagles to a playoff victory.

Wentz started every game in 2019 and helped the Eagles win the NFC East with an excellent four-game stretch in December. He became the first NFL quarterback to throw for 4,000 yards without a wide receiver having 500 yards receiving and became the first to throw 20 or more touchdowns and seven or fewer interceptions in three straight seasons.

But he was knocked out of his first career playoff start after nine snaps because of a concussion. Wentz hasn’t been the same since that hit from Jadeveon Clowney. He posted a 72.8 passer rating, 16 interceptions and four lost fumbles in 12 starts in 2020. The Eagles finished 4-11-1.

Peter Schrager: Bill Belichick is heading for ‘Coach of the Year’ and ‘NFL Executive of the Year’ I Cheat Sheet for Week 14