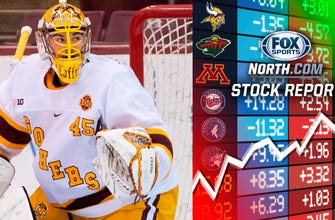 Minnesota’s senior goalie certainly had a good weekend. He stopped all 24 shots he faced Friday at Notre Dame and then came back the next day and didn’t allow any of the Fighting Irish’s 28 attempts reach the back of the net. The back-to-back shutouts gave LaFontaine five on the season, which is the second most in the NCAA (he had none in his first three years, the first two of which he spent at Michigan). LaFontaine is 15-5 on the season with a .943 save percentage, the latter of which ranks third in the NCAA but is the highest percentage of any goalie who has appeared in at least 15 games.

Edwards seems to be getting adjusted to the pro game. In four games this past week he shot 46.2% from the field while averaging 19.5 points, 6.0 rebounds and 3.3 assists. Tuesday night against the Lakers he poured in a career-high 28 points and became just the second Minnesota rookie to post at least 25 points, five rebounds and five assists with five or more made 3s in a game in franchise history (Wally Szczerbiak is the other). Edwards also crossed the 400-point mark in his 28th games, the fourth Wolves rookie to reach that total over that span.

The Towns-Russell combo (⬇️ DOWN)

Remember how excited friends Karl Anthony-Towns and D’Angelo Russell were to be reunited with the Wolves after Russell was acquired by Minnesota in a trade last February? Well, the two have played all of five games together and now Russell will be lost 4-to-6 weeks following knee surgery. Welp.

Quiet for most of the season thus far, Rubio had 16 points (including a season-high four made 3s) and five assists in Minnesota’s win over Toronto on Sunday then followed it up with 13 points against the Los Angeles Lakers on Tuesday night. It was his first back-to-back double-digit scoring games on the season – mainly because he had only one 10+-point effort to date, 17 back on Dec. 29 at the Los Angeles Clippers.

Minnesota Wild (⬆️ UP and ⬇️ DOWN)

The Wild returned to the ice for a game after a 14-day absence … and looked like they hadn’t played in two weeks as they were shut out by the Kings. Missing five defensemen surely didn’t help either. Well, it’s good to at least have them back and playing once again.

‘T.J. Watt should be back next week and return at a high level’ — Dr. Matt Provencher on Watt’s hip injury