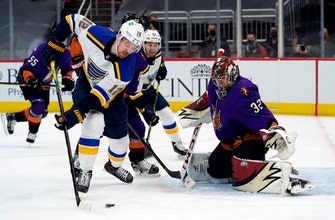 GLENDALE, Ariz. (AP) — Mike Hoffman beat goalie Antti Raanta over the shoulder with a wrist shot 1:49 into overtime to give the St. Louis Blues a 5-4 victory over the Arizona Coyotes on Saturday night in the sixth of seven straight games between the teams.

The team played four straight games in St. Louis, with Arizona winning the last three. The Blues won 4-1 on Friday night in Arizona and tied the series 3-3 with the overtime victory. They will finish off the longest—regular series in NHL history Monday at Gila River Arena.

“It feels almost like a playoff series,’’ said Hoffman, who also assisted on the tying goal. “They have a good hockey team over there.’’

Before a limited crowd of 3,237, Jordan Kyrou tied it at 4 for the Blues with a breakaway goal with 5:37 left in the third. Nick Schmaltz and Dryden Hunt scored in the third to give Arizona a 4-3 lead.

“They’re a good hockey club,’’ Coyotes coach Rick Tocchet said. “They won a Stanley Cup (two years ago) and they’re going to make pushes. I didn’t like our start. There were parts of the first period I thought we were sleepy. But in the second half, I liked our game.”

Ivan Barbashev had a goal and an assist for St. Louis, and Kyle Clifford and Zach Sanford also scored, and Ville Husso made 32 saves.

It was the biggest crowd for a Coyotes home game since last March, when the COVID-19 pandemic moved into high gear. Among the crowd were a number of first responders.

When asked about their presence in the arena, Garland said: “It means the world, we didn’t expect this (pandemic) to go on as long as it has … without them, none of this is possible.’’

It was the second game of a scheduled 11-game homestand, which will be the longest in the 25-year history of the Coyotes and the third-longest in NHL history.

Coyotes forward Johan Larsson was suspended for two games without pay for an illegal check to the head of Blues forward Zach Stanford on Friday. Hudson Fasching was recalled from the taxi squad to replace Larsson.

The Coyotes wore their purple reverse retro jerseys for the first time.