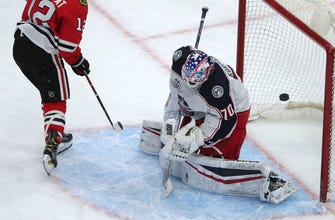 CHICAGO (AP) — Chicago Blackhawks coach Jeremy Colliton says his team has some guys who are going to make special plays.

It was Alex DeBrincat‘s turn on Saturday night.

DeBrincat scored 35 seconds into overtime, sending the Blackhawks to a 3-2 victory over the Columbus Blue Jackets.

Nicolas Beaudin scored for the second straight game for Chicago, and Carl Soderberg got his first goal of the season. Patrick Kane had two assists and rookie Kevin Lankinen made 29 saves, rebounding from a shaky performance during Thursday night’s wild 6-5 loss to Columbus.

“There’s so many games. You can’t really dwell on one game,” Lankinen said. “You’ve just got to move forward and think ahead. From every game you can learn something new, so you take what’s best out of it and move forward.”

DeBrincat got a bouncing pass from Kane in OT, tipped it into the air and then knocked it in off Joonas Korpisalo‘s left arm for his eighth goal of the season.

“Good things happen when (Kane) has the puck, so he was able to get it through,” DeBrincat said. “It bounced up off my stick and I just obviously wanted to put it towards the net. It worked out this time, but pretty lucky.”

Columbus had won three of four. Cam Atkinson scored for the third straight game for the Blue Jackets, and Patrick Laine got his sixth of the season. Korpisalo finished with 28 stops.

“There was a couple mistakes which cost us a couple goals at the end,” Laine said, “but mistakes happen and we just got to clean up a couple things.”

The game was tied at 1 before Atkinson redirected Zach Werenski‘s long shot through Lankinen’s legs with 5:13 left in the second. Atkinson had a short-handed goal and three assists in Columbus’ win on Thursday.

Dylan Strome had a prime scoring opportunity for Chicago with 1:40 left in the second, but Korpisalo turned him away by extending his left leg for an impressive save.

The Blue Jackets carried their 2-1 lead deep into the third, but Soderberg tied it again with his first goal for the Blackhawks. The veteran forward banged a shot from the high slot off the left post and in with 3:45 left.

“I thought we probably played one of our best periods in the third period,” Columbus coach John Tortorella said. “We gave them one chance, they scored a goal when we had the puck on our stick twice to get it out.”

John Tortorella believes that the @BlueJacketsNHL‘s third period was actually one of their best.#CBJ pic.twitter.com/40GsqHCl7K

Laine put Columbus in front with a well-placed wrist shot from the top of the right circle 6:39 into the first. He also got into a fight with Chicago forward Brandon Hagel with 4:54 left in the period.

The 22-year-old Laine has four goals and one assist in six games since he was acquired in a blockbuster trade with Winnipeg last month.

Chicago came up empty on two promising power plays in the first, but Beaudin tied the game with his second career goal 3:12 into the second. The rookie defenseman beat Korpisalo on the glove side on a wrist shot from the right circle.

Werenski played almost 22 1/2 minutes in his return to the lineup. He was activated off injured reserve after he missed three games with a lower-body injury.

The Blackhawks placed Connor Murphy on IR, retroactive to Tuesday. The team also announced forward Ryan Carpenter had been removed from the NHL’s COVID-19 protocol list.

Murphy, one of the team’s most reliable defensemen, has a right hip injury.

Riddle joins MSK on NXT 2.0 to call out Imperium