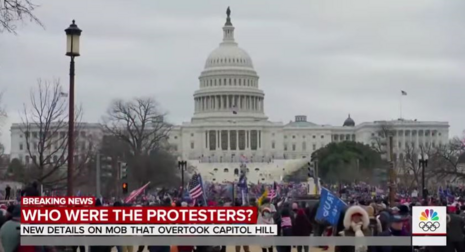 As the impeachment week unfolded, Maryland Democratic Congressman Jamie Raskin, the impeachment manager, has made a point of showing videos illustrating in graphic detail the attack on the Capitol.

And no one has been more emphatic in support of Trump’s impeachment for the events of January 6th than Senate Majority Leader Chuck Schumer of New York. Schumer, of course, sat front and center in the Senate chamber and watched the video clips Raskin showcased.

But there’s something curious going on with the media coverage of Raskin and Schumer. Let’s dip into a few recent headlines.

Here is this from NBC: “FBI, NYPD told Capitol Police about possibility of violence before riot, senior officials say.”

The essence is captured in the very first sentence.

“WASHINGTON — The FBI and the New York City Police Department passed information to U.S. Capitol Police about the possibility of violence during the protests Wednesday against the counting of the Electoral College vote…..

The Washington Post headlined: “Capitol Police intelligence report warned three days before attack that ‘Congress itself’ could be targeted.”

“Three days before thousands of rioters converged on the U.S. Capitol, an internal Capitol Police intelligence report warned of a violent scenario in which ‘Congress itself’ could be the target of angry supporters of President Trump on Jan. 6, laying out a stark alert that deepens questions about the security failures that day.”

Then there was this from The Hill: “Outgoing Capitol Police chief accuses House, Senate security officials of hindering efforts to call in National Guard.”

Now. What are we not seeing in the media? Let’s start with what we know.

In the aftermath of the attack on the Capitol, the House sergeant at arms, Paul Irving, resigned – and this was announced by House Speaker Nancy Pelosi. Shortly afterward, Michael C. Stenger, the senate sergeant at arms, resigned. Incoming Senate Majority Leader Schumer had made it clear that upon taking office he intended to fire Stenger.

Hmmm. What is the media not saying?

To go back in time a moment to the Watergate impeachment investigation into President Richard Nixon — which was short-circuited by Nixon’s resignation — there was one thing Democrats repeatedly insisted on.

What does this have to do with the media coverage — or lack of it — of the Capitol Police as overseen by Raskin and Schumer?

The fact is that Raskin and Schumer are in the Nixon position. Either  —  as senior members of the House and Senate committees that were in charge of the Capitol Police  — they knew ahead of time from those cited intelligence reports to the Capitol Police that the Capitol could be attacked – and they did nothing to protect the building.  Or, they didn’t know at all, which means they were incompetent.

Where is the coverage of that? Answer? Nowhere, of course. Here, to the contrary, are sample headlines covering Raskin.

On and on and on go the headlines and stories about Raskin. Not a one that I have seen mentions that Raskin himself is on the House Administration Committee which had a direct supervisory responsibility for the Capitol Police.

Ditto the headlines and stories about Schumer. Not a word that Schumer himself sits on the Senate Rules and Administration Committee that shares control of the Capitol Police with the House committee.

Yet the media coverage is quite plain that the Capitol Police, in the words of the Washington Post, were “warned three days before attack that ‘Congress itself’ could be targeted.”

But strangely there is no one in the media asking of Raskin and Schumer what was famously asked of Nixon by then-Tennessee Senator Howard Baker of the Senate’s Watergate investigating committee. To wit:

What did Raskin and Schumer know and when did they know it?

And why didn’t they do anything to protect the Capitol, their colleagues and staff from what was coming?

But no. In classic Washington style, the blame is dumped on the two sergeants at arms and the chief of the Capitol Police. They did indeed screw up – big time. But somehow their congressional and Senate bosses are untouched. And the media could care less.

What Not to Do with Marjorie Taylor Greene

The Worst Budget in American History