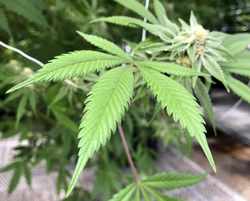 To cannabis watchers, 2020 was the pivot year in the long and inevitable march toward federal legalization of adult-use cannabis in the United States. Thirty-eight states currently allow medical marijuana, and 15 of these have made it legal for adults over 21 to consume cannabis freely. Most telling, in 2020 the people of South Dakota were the first to skip over “medical marijuana” and go directly to legalized recreational use by adults. We have reached the tipping point.

Since 2018, California has seen its cannabis industry grow to $4 billion annually, but only a tiny fraction is consumed as “medical marijuana.” Instead, adults primarily use cannabis to “get high,” which is a euphemism for relaxing, unwinding, and expanding your mind.

I’m a lifelong entrepreneur with five years in the cannabis business after getting an MBA at MIT and owning the 14th largest daily newspaper company in the United States. Recently, with three Wharton Business School professors, I founded Rootz Research, a cannabis-focused consumer analytics company that compiles a proprietary data set from California dispensaries. We believe it’s time to let the data speak, so we can get past the stigma associated with cannabis and overcome generations of scaremongering.

For starters, our data shows that Americans love to consume cannabis, and only 5% of sales come from products used for medical purposes. In addition, marijuana users favor an instant buzz, so 80% of cannabis sales are inhaled products to smoke or vaporize, including pre-rolls, vapes, smokable extracts, and loose flower. Most of the remaining 20% is consumed orally and affects people slowly like alcohol. This includes the small but fast-growing THC-infused drinks market where major brewers like Constellation and Molson are investing heavily in R&D.

Demographic data paints a picture of the cannabis consumer. In California, males spend 71% of cannabis dollars, and nearly half of all spending is done by men under 39 years of age (43.7%).  Women and older men prefer the metered dosing and the discretion of eating cannabis-infused candies. Smokable extracts, the cannabis version of alcohol shots, are likewise the domain of young males.

The data suggests that consumers use cannabis for the same reasons they use other “sin” products. Let’s face it: Many Americans enjoy using an array of social lubrication elixirs to satisfy our insatiable quest to feel good and be entertained. And we despise being told what to do with our own bodies and minds.

So, it’s long past time for our government – state and federal and especially the courts – to stop treating cannabis any differently than alcohol or nicotine. Let’s remember the self-deprecating admonition of Abraham Lincoln that human beings “who have no vices have damned few virtues.” So regulate marijuana, for sure, but legalize it now.

Unfortunately, while the American people get it, too many politicians still do not. In 2020, 60% of Arizona voters chose to legalize adult-use cannabis, but Debbie Lesko, a Republican congresswoman from a district in the western Phoenix suburbs, still supports federal prohibition. Her views were solidified, she said, by speaking to teens in addiction recovery programs. “Every one of them … said they started by using marijuana,” she said. “I am not saying that every person that smokes marijuana is going to be addicted to harder drugs, but I am concerned that we have so much costs associated with addiction in our country.”

Prior to the election, South Dakota Gov. Kristi Noem appeared in an advertisement urging a “no” vote against cannabis legalization. “The fact is, I’ve never met someone who got smarter for smoking pot,” she said in the ad. Not to be outdone, the state’s junior senator, Mike Rounds, added his voice to the cannabis debate. “I think this is really bad public policy,” Rounds said. “I never say I will never do anything, but most certainly I am not going to be a proponent of any type of actions along that line.”

Imagine a stigma so strong that a state’s top elected officials simply defy the will of their voters. That’s the cannabis’ conundrum. As Kentucky Sen. Rand Paul has observed of Republican leaders, “I always jokingly say … they were all in the theater watching [“Reefer Madness”]. And they’re still sort of this belief that marijuana is going to destroy the world somehow.”

Most American adults want the freedom to use cannabis legally. With New York and other states poised to legalize adult recreational use in the months ahead, we should implore our elected officials to resume protecting our inalienable rights, including life, liberty, and the pursuit of happiness.

Eric Spitz is a serial entrepreneur who entered the cannabis industry in 2016. He previously owned Freedom Communications, including the Orange Country Register.

Crime second only to economy as issue in Virginia race