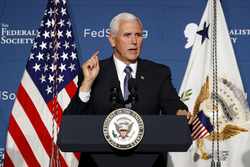 In the aftermath of the election, critics have pounced on the conservative legal movement for its role in the Trump administration. But they miss the crucial role of those who boldly defended the rule of law.

President Trump notably selected many federal judges from the Federalist Society, the country’s leading association of conservative and libertarian lawyers. Even more society members joined his administration. These members faced significant pressure to ignore the facts and law, as Trump launched a months-long effort to overturn his election loss, culminating in the infamous assault on the U.S. Capitol.

But Trump’s efforts resoundingly failed precisely because of Federalist Society members’ deep, abiding commitment to the rule of law. Unfortunately, this common commitment has been largely overlooked.

Respect for the rule of law is fundamental to the Federalist Society, as reflected in its statement of purpose. All members share this basic commitment, but they often disagree in good faith about how it applies. As a result, the Federalist Society is an incredibly big tent, home to a wide spectrum of views. Individual members do not define the society. Nor do its national and local-chapter leaders. The Federalist Society takes no official position on members’ behalf about any specific policy or legal questions.

The Federalist Society instead fosters vigorous, civil debate, including with those outside its ranks, on all sorts of legal questions with enormous implications for liberty and democracy. Challenging ideas sharpen members’ thinking, strengthening the organization’s commitment to its fundamental principles. All agree, however, on two core principles: Every argument must be debated and ultimately judged according to the rule of law. And the law’s content does not depend on politics or raw power.

Because of these shared principles, many Federalist Society members courageously rejected Trump’s attempts to overturn the election. Across the country, dozens of Republican-appointed judges, including many of Trump’s own appointees, dismissed meritless election lawsuits. Off the bench, former appellate Judge J. Michael Luttig, Vice President Pence’s attorney Greg Jacob, and Berkeley law professor John Yoo all advised Pence that he could not unilaterally reject duly certified electoral votes. Based on the Constitution’s clear text, they convinced Pence that he had no such authority.

Recently, some observers have suggested that the Federalist Society is somehow complicit in Trump’s efforts to overturn the election, pointing in particular to the actions of John Eastman. But Eastman was overwhelmingly the exception to the many other Federalist Society members who opposed those efforts.

On the Trump administration’s way out of power, Federalist Society judges and lawyers followed the law neutrally and dispassionately, despite enormous political pressure. They assessed their legal duty based on the text of the Constitution and relevant statutes — regardless of the implications for conservative policy goals, the Republican Party, and Donald Trump. “We are all textualists now,” Justice Elena Kagan once observed, but it was not always so. That widespread consensus reflects the remarkable success of the Federalist Society’s nearly 40-year effort to create and foster a legal culture dedicated to the proposition that law is not merely politics in disguise.

History will not kindly remember Donald Trump’s meritless attempts to frustrate the peaceful transition of power, but ironically, his greatest legacy may be the very judges and lawyers he selected from the Federalist Society who rejected those efforts. Their principled courage ensured that our government remains one of laws rather than of men. It also demonstrated the strength of the conservative legal movement. Whatever threatens the rule of law, the Federalist Society has been and remains the answer — it is emphatically the solution, not the problem.

Jonathan D. Urick is a Washington, D.C., attorney and has been a member of the Federalist Society since he entered law school in 2010. The views expressed here are his own.

Trump's Next Coup Will Have Full Republican Support

Vandenberg Air Force Base to Be Renamed Space Force Base