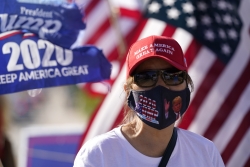 In their second impeachment of the man who is now no longer president, the Democrats fixed Donald Trump’s orange political head upon their rattle.

They waved it before a deeply divided nation and pronounced him a demon. On one level, it reminds me of the Native American sorcerer in the movie “Black Robe,” who castigates his rival as a michimindo, a demon.

On another, it fills me with foreboding. Not for Trump. I don’t care about Trump or the posturing of Republicans or Democrats. But I do care about our republic. And I see terrible pain ahead of us.

As Democrats shake the orange rattle, emotions and outrage are re-stoked over the disgusting events of Jan. 6 and the deadly attack on the Capitol by several hundred Trump voters, egged on by Trump himself, filled as he was with his absurd fantasies of a stolen election.

What we need is to take a breath and consider the implications of all this.

Trump is gone. Many Americans want to move on. The people are worried about their jobs, whether they can get the vaccine, whether their children’s schools will open.

The Democrats don’t have the votes to convict him. Chief Justice John Roberts is not even presiding, as required by the Constitution for impeachments of sitting presidents. The job should fall to Vice President Kamala Harris as president of the Senate. But the Biden White House doesn’t want her fingerprints on this, lest it backfire, so she steps back to allow Sen. Patrick Leahy of Vermont to preside.

The Democrats want to keep Trump politically alive for their political reasons. But what are they?

— To essentially put Trump’s 74 million voters on trial with him.

— To distract public attention from the tsunami of President Joe Biden’s radical executive orders and decisions.

— To drive a wedge between Republicans while binding the competing Democratic wings with a common hatred for their Republican michimindo, another reference to “Black Robe,” which I recommend.

“Democrats have thought all along that impeachment wouldn’t be costly to them,” says the political scientist Charles Lipson on an upcoming episode of “The Chicago Way” podcast. He wrote about the Democrats’ political logic in The Wall Street Journal and warned of miscalculations.

“But there could be costs that they’re not recognizing,” Lipson said. “One is that Joe Biden has depicted himself as someone who could move the country forward to work across party lines … but the Democratic Party is now looking backward for revenge.”

Implicit in all of this are the threats and shaming of 74 million Trump voters if they dare question the legitimacy of mail-in voting, which helped Biden win the election and which the Democrats now seem bent on federalizing to their advantage, or any aspect of election security measures.

But there is even more to all this, and it’s more alarming than Trump and that furry moron with the horns who barged into the Senate chambers. There are fences now around the Capitol with razor wire and thousands of federalized troops stationed there, giving Washington the look of a banana republic.

What is frightening is that Democrats and some of their corporate media allies have been busy conflating all Trump voters with “domestic terrorists.” In a recent essay, the Pulitzer Prize-winning journalist Glenn Greenwald, by no means a conservative, asked: “What acts should be criminalized by new ‘domestic terrorism’ laws that are not already deemed criminal? They never say, almost certainly because — just as was true of the first set of new War on Terror laws — their real aim is to criminalize that which should not be criminalized: speech, association, protests, opposition to the new ruling coalition.”

“But my question for you is around incitement,” she said. “We had a policy, and it was very controversial, it was carried out under the Bush years, and under the Obama years, of attacking terrorism at its root. Of going after and killing, and in the case of Anwar Awlaki, an American, a Yemeni American, with a drone strike for the crime of inciting violence, inciting terrorism.”

Wallace proves herself to be just another partisan blithering idiot, but she does reflect the zeitgeist of official Washington now, that those who oppose the status quo, who supported Trump, who question media bias, who want to drain the swamp, might all be terrorists. You know, the ones who didn’t storm the Capitol and sharply objected to it.

What is frightening is this kind of thinking is being adopted by those we once considered the adults in the room, among them former Gen. Stanley McChrystal, former commander in Afghanistan, quoted by Greenwald:

“I did see a similar dynamic in the evolution of al-Qaida in Iraq … [they] followed a powerful leader who promised to take them back in time to a better place, and he led them to embrace an ideology that justified their violence. This is now happening in America. … I think we’re much further along in this radicalization process, and facing a much deeper problem as a country, than most Americans realize.”

McChrystal was once relieved of command after making disparaging comments about then-Vice President Biden. Now he crawls cravenly to seek his place in the new order by sacrificing half the country.

As he opened Tuesday’s Senate trial with prayer, Senate Chaplain Barry C. Black said: “Once to every man and nation comes the moment to decide in the strife of truth with falsehood, for the good or evil side.

“Mighty God,” Black continued. “Could it really be that simple?”

No, it was never simple. But this is more than simple power politics now.

And it should frighten us all.