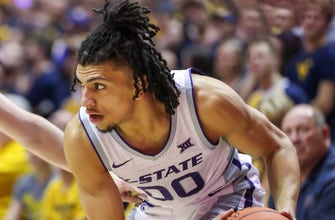 McClung, the Big 12 leading scorer, is averaging 25 points in his last four road games and capped off the game with a breakaway dunk in the final minute to put away Kansas State.

Early in the second half, the Red Raiders went on a 15-3 run and held off any comeback efforts after that point.

Texas Tech led wire-to-wire and forced Kansas State into 18 turnovers while only giving the ball up 10 times themselves.

This is the Wildcats’ 10th straight loss, which marks their second consecutive season with a 10-game losing streak.

Texas Tech: They made big shots numerous times as the Wildcats tried to mount any comeback in the second half.

Kansas State: This is somewhat of a moral victory for the Wildcats. In their previous six games against ranked opponents, they lost be an average of 25 points. They hung with Texas Tech for 40 minutes which they haven’t done with many teams this season.

Texas Tech takes on West Virginia at home on Tuesday.

Galaxy claw back from two-goal deficit, but miss playoffs with 3-3 draw vs. Minnesota United

Emmanuel Acho on Eagles’ QBs: ‘There isn’t a controversy yet but there is a worth while conversation’ ‘ SPEAK FOR YOURSELF