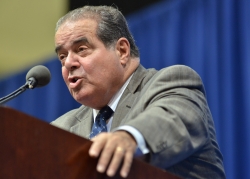 Perhaps they are thinking about the next election or their political legacies, but Democrats and some Republicans intent on impeaching and convicting former President Donald Trump are not reading the Constitution correctly.

When the Senate trial begins Monday, there will be lots of grandstanding and lawyerly pettifogging, and we will find out if Democrats can convince 17 Republicans that they need to convict the former president.

Forty-five Republicans recently voted that this second Trump impeachment trial is in itself unconstitutional. They are incorrect.

The bipartisan group of 55 senators who voted to proceed to the trial think that the Senate can apply a sanction after conviction. Constitutionally, they’re wrong, too.

Republicans are wrong because the plain text of the Constitution, as Michael McConnell, a Stanford professor and former federal judge, points out, makes no exceptions or qualifications to either the House’s “sole power of impeachment” or the Senate’s “sole power to try all impeachments.” Therefore, the Senate clearly has the power — what legal scholars call jurisdiction — to try the case.

But, jurisdiction is not the only consideration enshrined in constitutional law. Two other concepts, standing and justiciability, are central to any court’s decision-making at the beginning of a case. Along with jurisdiction, courts call them, collectively, “threshold questions.”

Because senators, especially the ones looking to convict, exercise judicial power when they try any impeachment, they would do well to take seriously the requirements for standing and the Supreme Court’s rules for justiciability.

Standing refers to someone’s ability to bring a case to court in the first place. In the 1992 case Lujan v. Defenders of Wildlife, the late Justice Antonin Scalia listed three factors that comprise the “irreducible constitutional minimum” basis for standing. While people probably know Justice Scalia for his acerbic dissents, the Lujan majority today is likely his most widely cited uncontroversial opinion.

In the second Trump impeachment, the relevant element of the Lujan trio is the last one: The court must be able to give a final, binding judgment to the party that wants a punishment.

The House wants to punish Trump for his actions. Article II, Section 4 of the Constitution plainly declares the required punishment: “The president … shall be removed from office on impeachment for, and conviction of … high crimes and misdemeanors.” “Shall” means it must happen. The Senate can’t remove Trump from a position he no longer holds, which means it can’t punish him. Thus, the House lacks standing.

To be clear, the House retained standing while Trump retained the presidency. But, once he left, the case became moot — purely a matter for discussion, like the number of angels that can dance on the head of a pin.

“Wait!” supporters of conviction cry out. “There’s also the bit in Article I about disqualifying a person who’s been impeached from holding office ever again.” That is true, but the passage doesn’t improve the logic of a post-presidency Senate punishment in the least. No matter how long we “Wait!” the Senate will still not be able to render the required punishment, so the standing problem remains.

More importantly, the disqualification punishment presents a justiciability question. Justiciability refers to the ability of a court to effectively resolve the case. Over several cases, the Supreme Court has identified a bunch of factors that lead to justiciability issues, but all of them stem from a single idea: It’s not the court’s job to decide this, but rather it’s somebody else’s job.

If the Senate tried to disqualify Trump from holding the presidency again, it would arrogate a privilege — determining who will not be president — that the Constitution explicitly reserves to another body: We the People. Thus, there is a clear justiciability problem with disqualification if it tries to block anyone — Trump, you, me, anyone — from winning the presidency or other elected office.

Alexander Hamilton declared that the Constitution stood for the idea “that the people should choose whom they please to govern them.” However imperfectly, this is what we do in districts and states throughout the country. And we choose through the Electoral College, a defense of which the current impeachment ironically springs from. For the House and Senate, a mere 535 citizens, to absolutely bar nearly 160 million from a completely free electoral choice turns the Constitution upside down.

Ultimately, the Senate can exercise its clear jurisdiction to hear the case, complete with senatorial bloviations, and lawyerly dodges. But, if the outcome is anything other than the status quo ante, meaning Trump remains eligible for the presidency in the future, the Senate will deal a grave blow to not just the Constitution but to every member of We the People who thinks they still have a choice.

When Will PA Mayors Wake Up to the Crime Crisis?