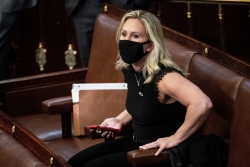 Several recent precedents offer House Republicans a clear roadmap on how not to deal with Congresswoman Marjorie Taylor Greene:

Under no circumstances should the Republican minority leader appear on glossy magazine covers celebrating the ascendancy of the radicals in the party as Nancy Pelosi did with The Squad. That’s an easy one. Don’t mainstream them.

Republicans should never elevate anyone who believes that Jews are imbued with the power to hypnotize the world and/or armed with massive lasers — though, as a Jew, I believe both could be quite useful — to the House Foreign Affairs Committee Democrats did with Ilhan Omar. This is something you might see in an idiocracy, not in the world’s greatest deliberative body.

Nor should Republicans pass resolutions shielding their members from taking responsibility for their crass anti-Semitic or bigoted sentiments as Democrats did with Omar. Not only would that be an act of sheer cowardice; it normalizes such rhetoric. Only leaders who place partisanship above decency would do something of that nature.

Republicans should eschew elevating any freshman member with puerile, half-baked, wish-casting economic theories into places like the powerful Financial Services Committee as Democrats did with Alexandria Ocasio-Cortez. It’s true, of course, that long ago a congresswoman Maxine Waters, who believed that the CIA had created the crack epidemic to kill Black men, was its ranking member. That was a national embarrassment.

Never allow the mad ravings of a first-term congressperson — who, let’s say, wants to ban meat and airplanes, or create a Ministry of Truth, etc. — to be used as the “framework” for the nation’s entire energy policy as is the New Green Deal.

Do not be tempted to rationalize or excuse the insanity of such members, even when they accidentally trip over the truth from time to time. When it comes to conspiracy theorists, there are always some plausible snippets of reality undergirding these beliefs. Take Greene, for example, who seems to believe that Hollywood celebrities are Satan-worshipping, cannibalistic pedophiles, which everyone knows is only two-thirds true.

Any loon who entertains the views expressed in the 314th comment in a subreddit on “globalism” doesn’t deserve your respect, no matter how many people voted for her or who hates her. The GOP should do whatever it can to marginalize her. What Republicans shouldn’t do is allow the press to create the impression that this powerless backbencher who ran virtually unopposed in a heavily Republican district matters very much. She doesn’t. No more than did fellow Georgian Cynthia McKinney, who served six terms in the House, and a lot less than the Squad.

Even if we concede that MTG, if I may, is a grade or two more outlandish than others, the fact is elected Republicans aren’t treating Greene as the future of their party. While Chuck Schumer tiptoes around AOC, Mitch McConnell has called Greene a “cancer” — harsher rhetoric than he’s used to attack someone on the other side like Ilhan Omar.

Of course, if you fail to exhibit the requisite intensity in calling out the loony statements of this freshman member, Democrats will claim you are complicit in the riots and worse. Unless you incessantly wring your hands over this one representative, the self-appointed conservative-morality police will latch on to some silly formulation, like “anti-anti-Taylor Greene,” to attack you. These are addicts jonesing for more Donald Trump. Sorry, but Greene will never be more than methadone.

Don’t get me wrong: There is no doubt that Greene’s comments are legitimate news and that her presence hurts the GOP. Republicans should do better self-policing for their own sake. The media’s daily, front-page obsession with her, however, is a transparent attempt to make her the face of the party and divert attention away from Joe Biden’s disastrous start — his unprecedented number of unilateral actions, terrible nominations, placating of Iran and funding of abortion around the world, just for starters. All of these issues are far more important than Taylor Greene’s comments. Liberals want to create the impression that fringe QAnon-ers are the driving force in American conservative politics.

No amount of conservative self-flagellation will ever be enough to appease them.

Sans Trump, Can GOP Expand Its Inroads to Latino Voters?